In 2000 the UN Security Council unanimously adopted Resolution 1325 on ‘Women, Peace and Security’. The resolution was a historic turning point in recognizing women's and girls' status, rights and position in relation to peace and security. UN member states were called upon to take the necessary steps to strengthen women’s participation in peace and security processes and to protect women and girls from violence before, during and after conflict.

Resolution 1325 was followed by 9 additional resolutions that supplemented and/or elaborated on specific features of conflict and its impact on women and girls. Over 98 countries and several multilateral organisations (such as the EU and NATO) have developed national or regional action plans, policies and programmes to implement the WPS agenda.

The Dutch WPS agenda is shaped through close cooperation between the Dutch government and civil society. Since 2008 this agenda has been elaborated in detail in our WPS National Action Plans (see the timeline below). As part of the development of NAP 1325-IV, over 15 consultation sessions were held. Representatives from the Ministries of Foreign Affairs, Defence, Justice & Security, and Education, Science & Culture, as well as from the police and over 60 civil society organisations, including development, humanitarian, peace building, women’s and diaspora organisations, participated in the process.

Government, knowledge institutions and civil society organizations can sign on to the NAP 1325, thereby committing themselves to contribute to one or more outcomes of the NAP 1325. The Netherlands based 'signatories', together with their local counterparts constitute the Dutch NAP 1325 'partnership 'or 'community'. They bear joint responsibility for implementing NAP 1325-IV. Within the partnership, each NAP 1325 partner retains its own responsibility to achieve results on the specific NAP 1325-IV outcomes, on the basis of its own mandate. This unique partnership increases the plan’s impact and broadens support for the achievement of the WPS agenda. 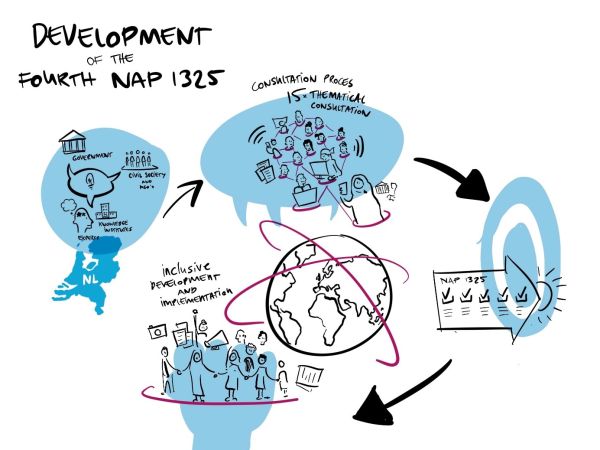 The NAP 1325-IV partners work together on specific themes and at country and regional level. Together they exchange knowledge, analysis and experience to improve the effective implementation of the WPS agenda. The power of our partnership derives from its diversity: small, mid-sized and large organisations, including development, humanitarian, peace, women’s and diaspora organisations, in the Netherlands and conflict affected countries, government Ministries and individual experts.

The oversight board has three functions with respect to NAP 1325-IV:
(1) It improves NAP 1325-IV’s governance, annual reporting and learning agenda.
(2) It ensures governmental support and timely political involvement.
(3) It strives for greater public support for the WPS agenda and for knowledge-sharing.

Find more info on the governance structure of the NAP 1325-IV here. 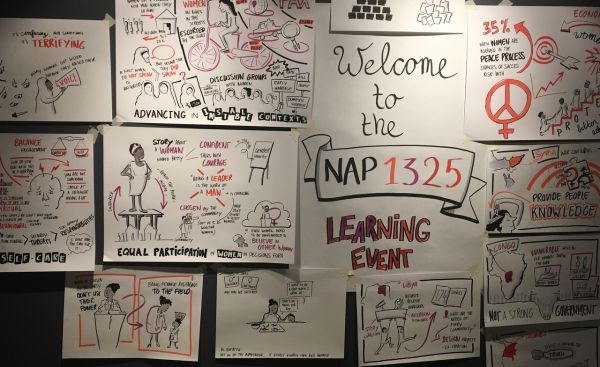 The WPS instrument is part of the SDG5 Fund under the Strengthening Civil Society framework (2021-2025). The focus is on protection of women and girls in conflict areas and strengthening of their position in peace processes. The fund has a budget of nearly €35 million and is one of the financing instruments that contributes to WPS specific programming under the Dutch National Action Plan 1325. The grant targets nine countries and is implemented by seven consortia consisting of NAP 1325 signatories as well as their partner organisations in the Global South. Capacity strengthening of women rights organisations in lobby and advocacy activities is an essential element of the programmes. In the policy note you can find more details on the grant. Asides this WPS instrument, there are other WPS specific programmes and the NL MFA also contributes to WPS as a cross cutting element in other programmes.

Find a list of all WPS Strategic Partnerships here.

NAP 1325 signatories (government and civil society) and their local partners have the opportunity to work together more in-depth in country-, regional- or thematic groups. Since 2020 group meetings are held online to enhance inclusivity and allow local partners or embassy staff to participate as well. Groups exchange experience, situation analyses, relevant tools and guidelines. Experts are invited to present and discuss their analysis or research findings. Activities are coordinated and voices amplified where relevant. Group meetings are effective networking opportunities. Each group is chaired by one or more signatories. Groups which are currently up and running or planned:

All NAP 1325 signatories are welcome to join a group and/or start one. Contact Karin de Jonge for more information.

The first National Action Plan was developed as part of de Akkoorden van Schokland (Schokland Agreements) that aimed to accelerate the implementation of the Millennial Development Goals.

On Schokland, a former island in The Netherlands, former Minister of Foreign Affairs Bert Koenders, together with Minister colleagues and the Dutch civil society, companies, knowledge institutes and private individuals signed the so-called Schokland Agreements. Many of these agreements were the result of extensive consultations during a government's 100-days dialogue in which about 350 representatives of companies, civil society organizations, churches, trade unions and knowledge institutions took part.

The second Dutch National Action Plan was launched in 2012 and signed by an even broader group of civil society organizations and government institutions, among which the Dutch national police. Based on evaluations of the first National Action Plan, this time a separate fund was allocated to the implementation of (part of) this NAP 1325-II. After extensive advocacy by diaspora and small women's rights organizations, an additional fund was launched to support their meaningful participation in the implementation of the NAP 1325-II: Small Seeds for Big Baobabs.

The third Dutch National Action Plan 1325 was launched in 2016 and extended till end of 2020. This NAP 1325-III too focused on funding WPS programs in particular countries.

Based on evaluations of NAP 1325-II and III, the fourth National Action Plan was provided with a much stronger Monitoring, Evaluation, Accountability and Learning framework (read in Annex 1 of NAP 1325-IV). A dedicated Oversight Board was established to oversee the implementation progress, as well as the yearly reporting to the Dutch Parliament. New to the NAP 1325 community is the focus on WPS mainstreaming in all relevant sectors and the national WPS agenda, i.e. the better protection and meaningful engagement of women and girls from conflict contexts in The Netherlands. NAP 1325-IV is approved in 2021 by the entire cabinet of Ministers.